Christmas, which marks the birth of Jesus Christ, is known and celebrated in many countries, even where Christianity is not the main religion. However, it is not Christmas that is the most important liturgical event in Christianity, but Easter. During the Easter week, Christians commemorate the Passion – the arrival in Jerusalem, trial and death of Jesus Christ – and his resurrection, which is the pivot of the Christian faith. The icon of Resurrection

A Christian Celebration
Easter begins on Palm Sunday, when Jesus entered Jerusalem and was welcomed by the Jews as the Messiah with the waving of palm branches. The most important days of the Holy Week, following Palm Sunday and leading up to the Sunday of resurrection , are: Maundy Thursday, Good Friday and Holy Saturday. 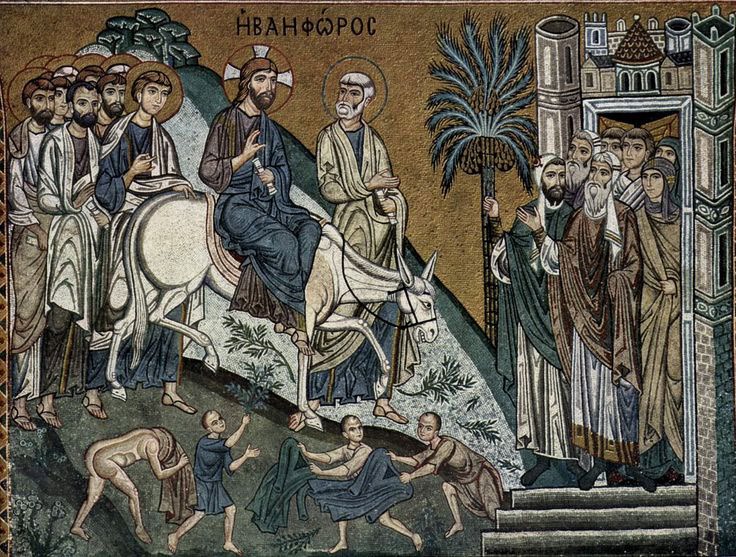 The entrance of Jesus in Jerusalem, cathedral of Monreale, Italy

Maundy Thursday commemorates the Last Supper, in which the disciples of Jesus were gathered and Jesus instituted the Eucharist i.e. thanksgiving represented by the sacrifice of Jesus Christ’s body and blood in the form of bread and wine. Good Friday marks the trial and death of Jesus on the cross, which became the symbol of Christianity. It is the only day of the Christian liturgical year in which the Eucharist is not celebrated. In the Catholic Church, the Tenebrae, Darkness, is sung in memory of Jesus’ passing. Here are two video links, the first to the Gregorian Popule meus, and the second to De Victoria’s Responsoria de Tenebris:

The end of Holy Saturday is the most important celebration of the Christian liturgical year: the mass to celebrate the resurrection of Jesus Christ. In the Catholic and Orthodox Churches, the celebration begins around 11pm and at midnight the resurrection is announced. The congregation gathers in the dark until the Easter hymn is sung and candles are lit from one person to another, starting from the priest at the announcement of resurrection. Bells are rung at the announcement to mark the end of the three-day silence and the hymns Exultet (Let the Angels Exult) and Christós anésti (Christ is Risen) are sung in the Catholic Church and Orthodox Church respectively. On Easter Sunday morning, the Catholic Church also celebrates the mass missa in albis, during which the resurrection is again remembered. The hymn Victimae Paschali (To Passover Victim) is sung, in which Jesus Christ’s defeating death and appearance at the tomb to Mary of Magdalene and the women are remembered. Miniature of the Jewish Passover from a Medieval Jewish Bible

Easter, which marks the day of salvation for Christians, has its roots in Jewish Passover, the Pesah. As the name suggests, Passover honours the passage of the Jews from Egypt, where they were slaves, to the Promised Land, under the guidance of Moses. Their passage of salvation was described in the book of Exodus: it begins after the night that God ordered the Jews to mark their doors with the blood of sacrificed male lambs. That night, every first male born in the land of Egypt was struck with death, but the Jewish homes with marked doors were spared. For the Jews, this is their most important festival of the year.

Jesus suffered and died during the celebration of Passover. For Christians, the Passover was a prefiguration of the sacrifice of Jesus Christ, allegorically known as the Lamb of God. Easter honours the passage to freedom from slavery of sin and death through the sacrifice and resurrection of Jesus Christ.

In all non-Germanic languages i.e. in Latin, Greek and Slavic languages, the name of Easter comes from the Hebrew Pesah and is referred to as Pascha. In German and English, on the other hand, the name comes from an ancient pagan goddess of spring, Eastre, whose festival was held in mid-April. The Christian festival overlapped with and adapted the pre-existing pagan festival with a new meaning.

This is a common situation: Christianity did not appear in a void but in a world already characterised by certain beliefs and traditions. Thus, traces of pre-existing pagan cults remains in Christian festivals. In Southern Italy, for example, there is the tradition to decorate the altar on Maundy Thursday with the buds of cereals that have been left to grow in darkness for forty days. These buds are called sepolcri (sepulchres). A week after Easter, these buds are sown in the fields as a blessing. This tradition is a remnant of the Gardens of Adonis, a pagan deity whose death and resurrection marked the end of winter and the beginning of spring. Similarly, hard-boiled and painted Easter eggs developed from an ancient religion, Orphism. Orphics believed that everything came from the egg, and on the egg everything subsists. For Christians, the egg became a symbol of indestructability of life and constant regeneration, just as Jesus Christ was resurrected from death to eternal life.

Dr Paolo Di Leo has been a lecturer at HASS since 2013. He conducts research on Neo-Platonism through the works of Plotinus, St. Augustine and Martin Heidegger. He teaches the Humanities Core curriculum, and developed the elective The Question of Being. He leads a team of SUTD students on an annual trip to Florence in Italy to explore the history of Renaissance architecture and urban design.